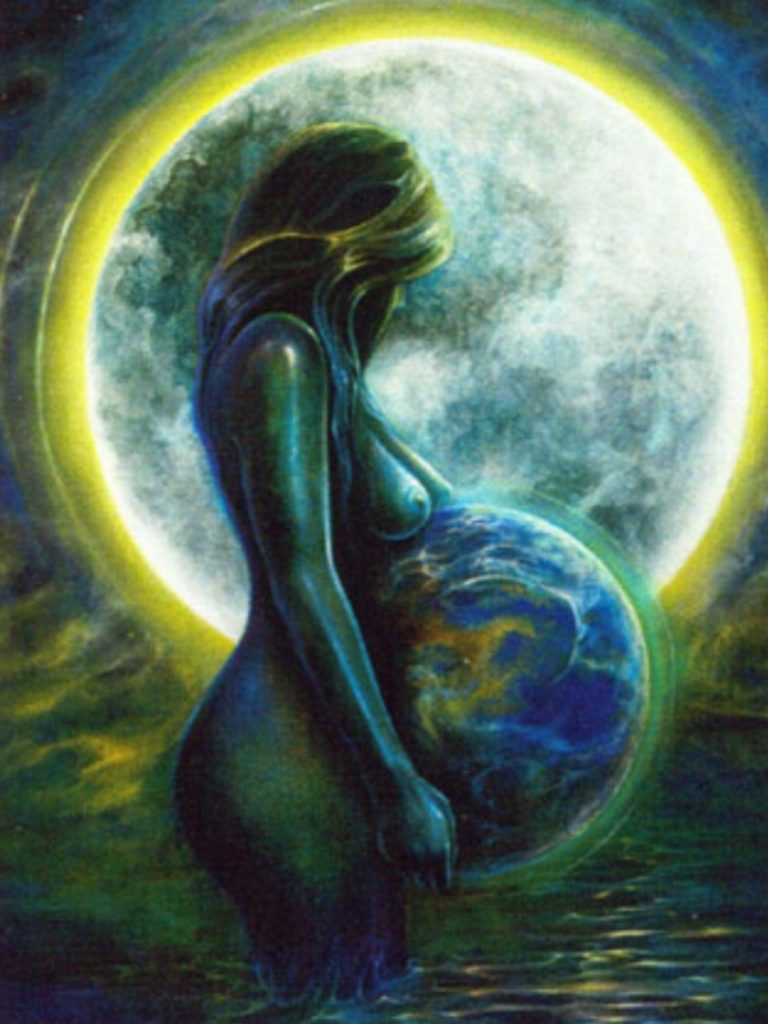 A woman’s push is the supreme act of creation. Patriarchy has attempted since time immemorial to debilitate the fascinating power of this push which belongs entirely to the feminine realm. Birth has become ingrained in the minds of citizens as an urgent time for institutional intervention at the expense of motherly instinct. Reclaim your instinct, woman. Push, damn it!

Three years before the big push, Molly took a puff which shot straight to the moon and back into her thoughts. Queen of the sky, it showed a peculiar ghastly face, dropped jaws, and  two deep holes. Death is watching me. The moon rotated, and then, from a different angle, it showed Molly the carefree and illuminating looks of a baby boy.

In the center of her amber-crisp lighted living room, Molly confronts the yellow. She stared in the eyes of her unborn baby. He was naked and floating, as all babies should be. Six months later, her unborn baby planted himself in her womb with the grace of an instinctual act of procreation. Alex came 9 months later, as Molly expected, on a parched day of July, the very first one.

A sacred, uninterrupted, and natural push is the best kept secret of motherhood. One that Molly understood too well. The medical system aimed to push her in the direction of captive birthing, but with the best of intentions: to intervene and control out of fear. But Molly believed in the power of her push. She knew too well that birth is a sacred time in a woman’s existence, one in which the female should honor her motherhood, her instincts, and the potency of her inner guidance in pushing a baby out into material existence.

The two doctors said Molly’s was a high risk pregnancy. They said Alex might not live to see this world of ours. They said Alex might spend time in the NICU, born with undeveloped lungs. They told her to quit on her students and stay in bed. They said Alex was at risk for being stillborn had she attempted a home birth. They said Alex was underweight. They said Alex needed weekly ultrasounds and constant monitoring. They wanted to induce her artificially. So much for baby gently marking his arrival with the flow of water! They said Alex would be two weeks late from the original due date. They said that her placenta, Alex’s home and pantry, was heavily calcified and didn’t provide nutrients for him. They showed proof of it too! Here are the images produced by the ultrasound machine, lady. They said Alex was going hungry in the womb. They said she must count ten kicks on the clock at specific times. This is what they said. They did nothing but say say say. Molly felt and trusted what she felt. Her instinct won.

Alex came into this world on a beautiful, hot, and first day of July, at 6:10pm, on a Sunday. Alex was born in the comfort of his home and didn’t leave Molly’s side for 1 minute. Molly did not quit on her students nor her yoga practice. Alex was born healthy and beautifully, each step of the birthing process building gently on the previous, with breathing sessions controlled by the woman, so that she can honor the big push. She decided to carve her own sacred birth story, with nothing but a handful of blueberries and a teaspoon of honey for fuel. Placenta was beautiful and healthy, the tree of life stretching boldly towards all corners, and she turned it into a tincture for mother and baby. Alex was so active and playful the whole time in the womb, just a bit shy whenever Molly seemed upset. Molly didn’t need the counting. She needed the feeling. And Molly got what she wanted. Alex got what he deserved.

Molly has learnt that without the push, nothing can be born. Push is the ultimate act of creation. Love is born. And you forget everything. Molly forgot everything. She decided to smile at him often. Sometimes she yells at him too. But that’s ok. Because Molly is human, a human in full charge of a tiny version of her own womanly self. What matters is that Molly’s gut has never led her astray. She sniffed Love and implanted herself in its full view—for a complete embrace.

The carnival of life is brought to you, ladies and gents, by the woman’s push.

***This short fiction piece is featured on AlphaFemaleSociety blog (link under publications).